A team of Japan-based researchers has developed a solutions which allows for precise manipulation of terahertz waves using metalens integrated with a resonant tunnelling diode (RTD). In the work, published in Applied Physics Express, it is verified weather the created collimating lenses, which converts approximately spherical-shaped terahertz waves to aligned terahertz waves, could be mounted closely to the electronics. 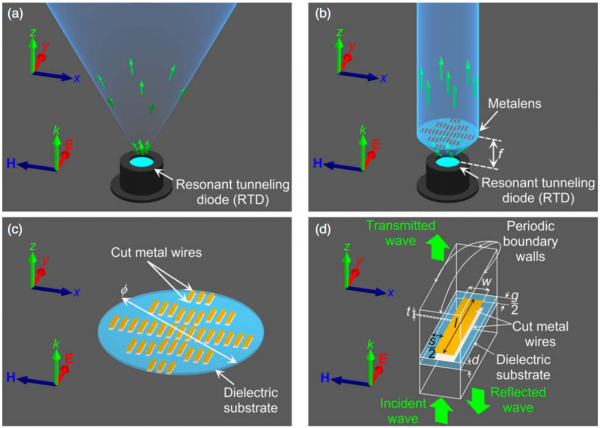 Terahertz radiation is classified as radio waves with very high frequencies, and the amount of information transmitted with a wave increases with its frequency. Therefore, communication technologies are currently being worked on, not only for 5G applications, but also 6G, 7G, which would provide the opportunity of transferring more information, would also increase the number of available addresses. Such a solution would also allow for better targeting of sent data, precisely defining the recipient.

In the future, terahertz will enable rapid transfers of large amounts of data over short distances – for example they will provide higher speed of home internet or hotspots located in public places (e.g. airports, stations) will allow to quickly download a film or e-book before travel.

The presented solution may also be the beginning of more dynamic increase in the miniaturization of THz-based devices. Scientists based on their earlier project, where they created an ultra-thin interface – a metasurface with a low reflectance and high refractive index, allowing the manipulation of electromagnetic waves (particularly terahertz). It made possible to replace traditional three-dimensional lenses with two-dimensional components.

The illustrations included in the publication facilitate understanding the idea of the described set up with a metalens: the RTD transmits terahertz waves of the appropriate frequency and in the right direction (fig. A), and thanks to the metalens, their further propagation is parallel (fig. B).

“In this letter, we integrate a fabricated collimating metalens made with our original metasurface with an RTD at a distance of 1.0 mm (1.0 λ). Measurements verify that the collimating metalens integrated with the RTD enhances the directivity to 3.0 times that of a single RTD (…) and oscillates at 0.312 THz” – write scientists in their publications.

The values they receive are promising for future 6G wireless applications.