Terahertz is the region of electromagnetic radiation spectrum between microwaves and far infrared. It is also referred as the “terahertz gap” due to difficulties with generating and detecting waves in such ranges. Despite the fact, that the sources of the neighbouring electromagnetic radiation ranges are well developed and described, they lose their power at terahertz frequencies. Although for the extreme THz values the methods generating infrared or radio waves or oscillators with multiplied gigahertz frequency can be used, the signal obtained in this ways will be weak. Thermal and semiconductor sources are also used. But all existing solutions are still relatively expensive, mainly due to their limited number and size – more available solutions will certainly lower production costs and improve signal quality. This will enable the use of terahertz radiation on a larger scale, for example by replacing x-rays.

Scientists from the Argonne National Laboratories, the University of North Carolina at Chapel Hill and Oakland University created a next-generation terahertz source, which is not based on the traditionally used photoelectric effect, but on spin electronics. Spintronics uses an additional property of an electron – its intrinsic spin – the direction of which can be controlled by an electric field or spin currents, without the involvement of an external magnetic field. Therefore the emitted terahertz field in two-dimensional hybrid metal halides (2D-HMH) is generated by ultrafast spin current pulses excited by a femtosecond laser.

“We find that upon reversing the external magnetic field polarity, both the phase and emission intensity of the THz electric field can be coherently controlled (Fig. b), in contrast to that in metallic heterostructures and 3D-HMH materials where the emitted THz field intensity is mostly independent of the magnetization direction and laser polarization.” – says Dali Sun, assistant professor of physics at North Carolina State University and co-corresponding author of the work.

The 2D-HMH materials may turn out to be better than semiconductors materials, which requiring advanced depositions methods and are more susceptible to defects. Improved stability and scalable thin-films HMH production process will meet the growing needs for cheaper THz sources, ensuring control of the coherence of the emitted radiation. 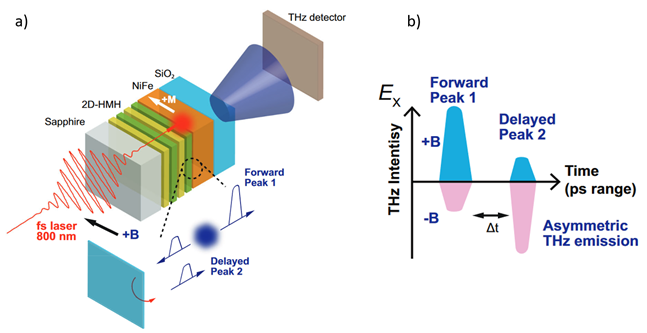 a) Schematic structure of the hybrid spintronic terahertz emitter b) Antisymmetric THz radiation excited by femtosecond laser. Following the terahertz generation mechanism in metallic spintronics emitters, the radiations will be emitted into two directions (forward and backward). For this reason the measured time traces of the signal contain two groups of peaks. The first one corresponds to the forward radiation and the second one is delayed due to reflection at the interface between the sapphire substrate and the air. The difference between this two groups of peaks is the time, which is required for the backward signal to transmit through the sapphire twice. Credit: Kankan Cong et al, Coherent control of asymmetric spintronic terahertz emission from two-dimensional hybrid metal halides, Nature Communications (2021).

The developed device is lighter, cheaper to manufacture and has better efficiency than conventional terahertz generators. Moreover, its components are more durable and resistant to defects. Scientists hope, that their work will launch research into promising low-dimensional hybrid metal halide materials for future spintronic and spin-optoelectronics applications.