The absorption bands of almost all explosives are in terahertz radiation range, which makes it very effective in detecting them. Nowadays terahertz scanners have become increasingly important in counteracting terrorist threats – they are enabled to detect not allowed items for example carried by travellers at airports. However, commercially available terahertz scanners cannot achieve as high resolution as X-ray scanners, due to much longer terahertz wavelength. For this reason the images from terahertz scanners are blurry and not very detailed. Krzysztof Świtkowski, PhD, from the Faculty of Physics of the Warsaw University of Technology is working on improving the resolution of terahertz imaging.

Terahertz radiation refers to the electromagnetic radiation region between microwaves and far infrared. For a long time this range was not attractive for application prospects, as there were neither practical sources nor detectors of this radiation. Technological progress that have taken place in the last ten years, have made terahertz waves successfully used on an industrial scale, primarily in detecting dangerous objects. Importantly, terahertz radiation, unlike X-rays,  is non-ionizing and completely safe for living organisms. Hence, terahertz scanners can be used for frequent and non-invasive scanning of people, e.g. at airport gates, subway entrances, in embassies or other diplomatic spots. Unfortunately, the drawback of terahertz imaging is large blurring and lack of details.

“The aim of my project is to generate terahertz radiation with unique properties – the so-called vortex beams. Then we will examine potential of these beams for application in scanners with increased resolution” – says Krzysztof Świtkowski, PhD, laureate of the HOMING 5/2018 program of the Foundation for Polish Science.

Vortex beams with regard to the optical range of electromagnetic waves, are already well known. Their discovery resulted in many spectacular applications, e.g. STED microscopy, for which the Nobel Prize was awarded in 2014. A crucial element in this microscopy is the usage of an additional vortex beam to selectively quench fluorescence in the samples. Thanks to the use of such a beam, the spatial resolution of the obtained images compared to the traditional fluorescence microscopy has increased. “The innovation of my project is based on the synergy of terahertz technique with the latest achievements in optics. I intend to try out several innovative vortex beams generation methods in relation to terahertz radiation, and then use them to build a laboratory terahertz scanner with increased resolution. The resulting laboratory scanner should be characterized by greater detail and sharpness of the obtained images. In the long term, such device can be used not only to detection of threats, but also in terahertz microscopy, for example to rapid cancer diagnosis” – emphasises Świtkowski. 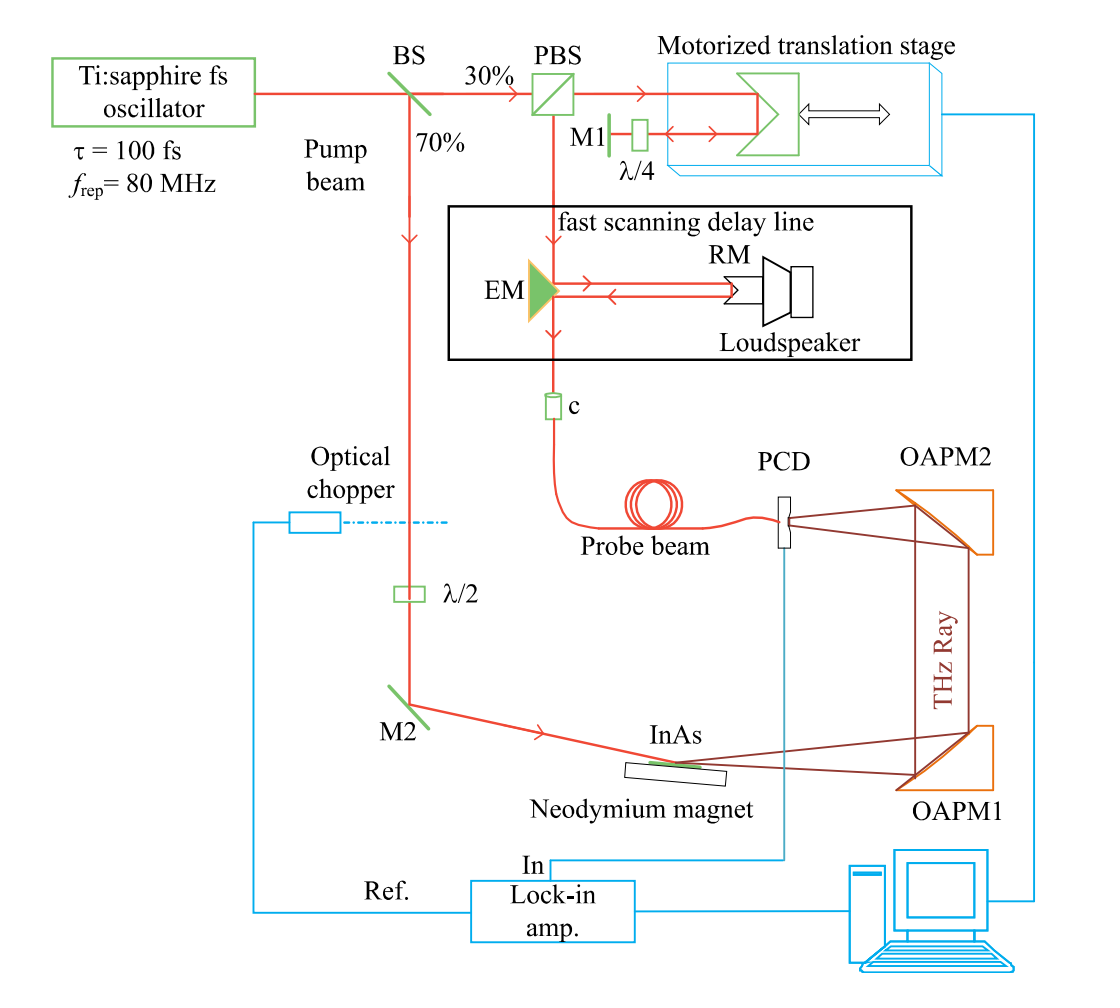 Terahertz radiation refers to the electromagnetic radiation spectrum between microwaves and far infrared. A few decades ago this range of wavelengths was not easily accessible due to lack of efficient methods of its generation and detection, and referred as a “terahertz gap” in the electromagnetic spectrum. The statement is especially true in case of frequency range near 1 THz, which corresponds to wavelength of 300 μm.

At one point scientists started reaching frequencies in the range of 100 GHz and above by electronic means. Thus they made the gap narrower. At the same time due to an appearance of commercially available compact femtosecond sources, intense pulsed lasers and related progress in nonlinear optics, again the gap became narrower. The opposite, optical side of the THz spectrum became accessible.

Nowadays the term “THz gap” is almost meaningless because we have many commercially available THz sources. Here it worth to mention about this methods:

Due to its unique properties, terahertz radiation found an enormous number of prominent applications in science, technology, and industry. Among the most important applications there are: THz scanners for automobile and plastics industry, security scanners of explosives, THz spectroscopy of pharmaceutics, biomedical applications, in art conservation, THz Time-domain spectroscopy and THz telecommunication.

The increased interest in this field stimulated its rapid progress, giving numerous feasible ways to generate and detect THz radiation. Since a few years back THz science become one of the hottest and most recognized topics in physics, electronics and photonics with published scientific papers exceeding 4 000 per year (4.6 k record result in 2016 according to Web of Science with topic “terahertz” as a search term).

One of the youngest and more modern equipped laboratories at the Faculty of Physics WUT.

In the laboratory there is carried out the research on methods of emission, detection of terahertz radiation and optical properties of many materials, in particular polymers and semiconductors, with potential in construction of photonic devices.

In the case of polymeric materials, the experiments are focused primarily to the phenomena of absorption: electro-optical, photochromic and two-photon. In the case of semiconductors, the following events are investigated: the dynamics of recombination of carriers in the range of 100 fs to 1 ns, including measurements of the lifetime of carriers in the reflection configuration, measurements of time-resolved photoluminescence using a streak camera. Time-resolved measurements are made of fast LTG GaAs MSM photodetectors and photoconductive switches. The measurement technique is sampling of the electric field with an electro-optical crystal (Electro Optics Sampling). 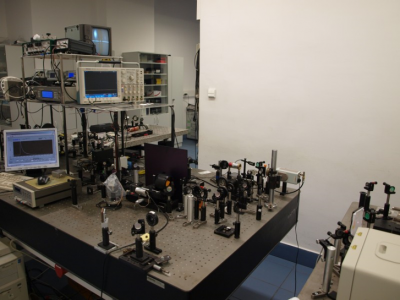 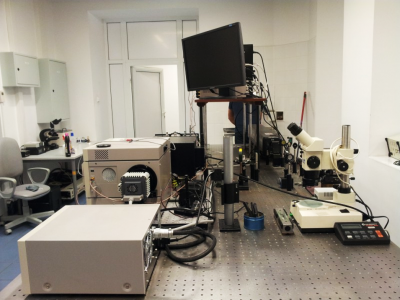