Prototype electronic controlling unit was built for efficient and reliable data acquisition with fast optical delay line. The unit comprises digital sine generator with time marker and audio amplifier. Due to limited budget the sensor-less triggering in data acquisition scheme based on time relation of the driving sine signal of the speaker was used.

For rapid prototyping a modern microcontroller with an integrated digital to analog converter was used. The principle of operation of the generator is as follows: fast microcontroller allows us to direct synthesis of sine signal as well as generating additional triggering pulse.

When the sine analog drives the speaker membrane at the exact beginning of the sine the data acquisition starts. In this period of time 7 membrane travels along the given distance so-called excursion. We choose a speaker with relatively long excursion to cover broad time scale to include full THz pulse waveform.
In Figure below we present comparison of the result obtained by means of previous version of the set-up with improved fast scanning measurements of the same phase mask element in top and bottom row, respectively. The spatial resolution was improved and higher sampling resolution was possible to apply. 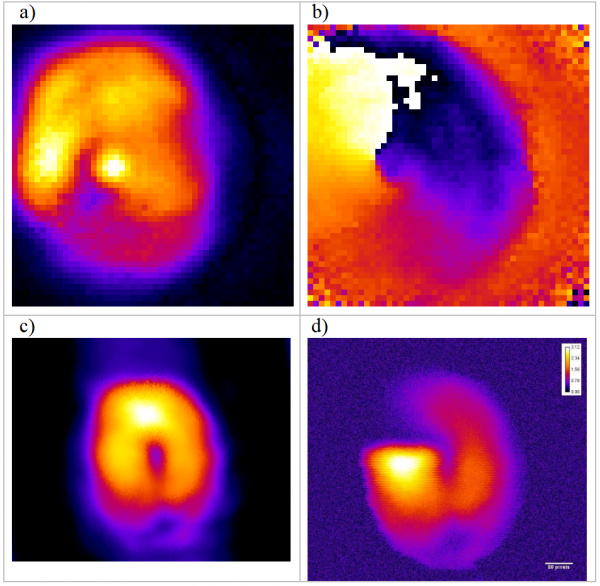 Before the presented scan took 9 hours, in improved version 4, but with twice special resolution. In figure c) there is low intensity spot in the center of the beam, also in Fig. d) there is azimuthal phase gradient with maximum amplitude of 3.12 which is close to value of π. The presented results confirms that we obtained THz vortex beam with charge q =1.